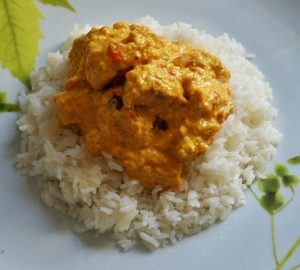 I’ll admit that I’m rather nationalistic when it comes to cooking. I assume that Italian food made by non-Italians never quite hits the mark, and that in thirty years I still won’t be able to make Puerto Rican white rice that passes. Unsurprisingly, it’s never occurred to me to take on Indian cuisine, aside from a WASPy dash of curry powder in an occasional chicken salad. Once more, thanks goes to Simply Recipes for tonight’s magnificent, seconds-even-though-we-already-hurt dinner of Mango Chicken Curry over non-native Puerto Rican white rice (I don’t keep basmati on hand…yet). The vegetable-based sauce that serves as the eventual purée takes a pass through the blender to achieve that surreal texture, and I suggest using your Cuisinart Mini-Prep Food Processor for the initial pre-cook chopping. What, don’t have one!?! Skip dinner and pick up McDonald’s on your way to the mall.

I can’t imagine why I shouldn’t take the liberty of retyping the recipe with several necessary alterations, since I find the idea of making ad money off this sort of thing unseemly and crass. I discourage SR from taking offense at my edits; I don’t expect everyone to have such a refined palate as mine.

**Cilantro is suggested as a garnish in the original recipe. Fresh cilantro has only one purpose: to reprimand swearing children. Soap in the mouth is child abuse, but a single leaf of a pepper-free cooking herb sends a message nicely with no chance of getting the state involved. To anyone who wonders whether this is indicative of my own child-rearing practices, don’t worry – my children are perfect angels, speak/gurgle with flawless non-regional accents, and consider using FCC-banned words utterly beneath them.

Heat 2 tbsp of oil in a deep skillet or large saucepan over medium-high. Add the onions and cook, stirring, for 3 minutes or until soft. Add in the pepper plus another tbsp of oil and cook for 3 more minutes. Toss in the curry and cumin, cook 3 more minutes, adding extra oil if anything starts to stick to the pan. Add the ginger and garlic, stir, and cook for 1 minute.

Stir in the vinegar, water, and half of the mango chop. Increase the heat and bring it to a thick and icky boil, then lower the heat and simmer for 15 minutes, stirring every minute or so. Pour the sauce into a blender and purée until it’s smooth, then return it to the pan. Dump in the chicken and raisins, stir, and bring the whole thing back to a simmer. Cover it up and cook for 10 minutes, until the chicken is done but not dry.

Add half of whatever quantity of mango chop you have left, then stir in the cream. Cook over low heat for a couple of minutes while you add quite a bit of salt and some pepper and adjust seasonings. I threw in a sprinkle of crushed red pepper for some heat that was blatantly lacking from the original, and I found it necessary to splash in another few tsp of vinegar to cut the mango.

As noted, I served this over Puerto Rican white rice (defined by a painfully specific and elusive texture and consistency), and I don’t know that the conventional basmati accompaniment would stand up as well to the sauce as the denser medium grain. Again, feel free to garnish with cilantro if you feel like ruining the entire thing, but if you absolutely need some green for contrast (<<cough>>simpleton!<<cough>>), throw some parsley florets onto the plate and fully acknowledge your, as Heidi Klum would offer, questionable taste level.

I’m Mary Peña. For two years, I’ve been enjoying time at home with four-year-old Billy the Kid, already a formidable gardener and sous-chef, and during that time have produced an additional two individuals, Sally and Linda. I run a noisy, but tight ship, with my three top priorities being to keep everyone alive, to prevent household fires, and to raise content, kind people who, if I play my cards right, will ensure I spend my twilight in a deliciously expensive retirement chateau. More ...